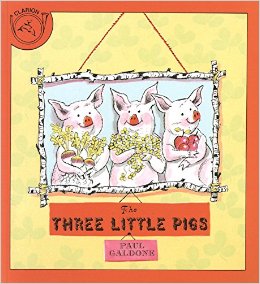 Growing up, I remember many stories that my teachers would tell without using a book. No, they would tell the story from memory, and it was like they were passing it down to us. The tale of The Three Little Pigs is classified as one of these stories that are passed down time and time again. Traditional Literature in the term for such timeless stories that almost everyone has heard from their parents, grandparents, or friends. Hearing this particular story, I always found the story amusing.

The reason I chose Paul Galdone’s rendition of The Three Little Pigs is because of his elaborate pen sketches. Not only did he illustrate traditional folk tale literature, but also he wrote some of his own stories. His colored pen sketches bring these stories that are often just told orally to life. When we see the big bad wolf approach the houses, we aren’t terrified because the sketches make the scary wolf a bit less scary. The lined sketches create very two-dimensional characters that give this folk tale a light funny feel.

Traditional Literature has been used in the classroom for a very long time, and I vaguely remember hearing them throughout the early years of school. This story is appropriate for Kindergarten through 2nd Grade, and it could be used in various ways in the modern classroom. One way you can incorporate The Three Little Pigs in to the class is through character education. Students can see that the first two pigs were a bit lazy in building their houses. I would use this to teach that hard work pays off. Also, the concept of sequence of events is evident in today’s Language Art standards, and this concept can be difficult to teach. However, with a very familiar story, teachers can use a foldable to teacher sequence of events. I would use a foldable to place the Beginning, Middle, and Ending of the story. Likewise, another difficult  Language concept to teach is cause and effect. I would use this story to prompt students to think critically about why the first two pig’s houses collapsed. We should not neglect these timeless traditional stories. They can be useful in the modern classroom.